I got a call one otherwise boring Friday afternoon to see if I could jump in the following evening in the Hessische Staatstheater Wiesbaden’s production of Elektra. I sang the role of the fifth maid five years ago in Cologne and Uwe Eric Laufenberg, the then Intendant, has since moved to Wiesbaden to shake things up around there.

How exciting! I jumped on a plane early the next morning and arrived just in the nick of time for a super quick costume check. 90 minutes before the curtain went up, I got 5-10 minutes on stage with the other maids… it’s a small role but the fifth maid gets her own mini-aria, so it’s a great little showcase. The other gals were super friendly and the staging was pretty easy to get under my belt, so that whole process took 7 minutes.

The next step was a quick musical rehearsal with the conductor, Vassilis Christopoulos – just to be sure we didn’t meet each other on stage for the first time. That rehearsal took all of 3 minutes, and then it was already time to get my face on.

It went like a dream and then it was all over! Thrilled to meet old friends from Cologne (Stella An, Young Doo Park, Wolf Mathias Friedrich, Dalia Schächter, Catherine Foster and of course, Uwe Eric Laufenberg). I was also particularly happy to meet fellow Aussie singer, Celeste Haworth. Celeste showed me around and we had a ball backstage.

I’ll be singing an evening of song for the Richard Wagner Association in Dortmund in September this year. Joining me on keys is Jonathan Ware. The programme is not yet set in stone, but it’s looking like Brahms, Berg, and Wagner. I’m excited to be revising some old favourites (the Wesendonck Lieder) and also getting stuck into some yet unexplored territory.

The results of the Wagner Stimmen Wettbewerb in 2015: 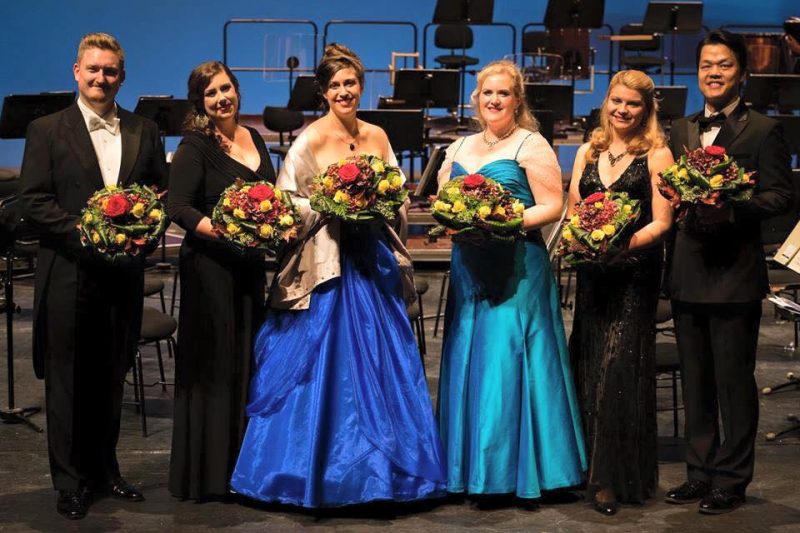 A seriously awesome evening at the Baadisches Staatstheater Karlsruhe. Thanks to the staff at the Theater, the Richard Wagner Verbände in Karlsruhe and Berlin, and to the enthusiastic audience for cheering so unbelievably loudly and then almost unanimously voting for me!

I’m ready to get out there and get singing again after taking almost 2 years off to raise my lovely baby daughter. I am stronger and fitter than ever, and I wonder if the results of this competition might bring some exciting projects my way. Let’s hope so. I am open for anything, universe!

The finalists were all in terrific spirits backstage and we had a lot of fun, which was refreshing – competition vibes are not always quite so jovial. So thanks, finalists, and here’s to antipodean singers bringing it! (Ms. Sharpin is a Kiwi).

Thrillingly, I’m one of six singers to appear in the finals of the Wagner Stimmen concert tomorrow night at Badisches Staatstheater Karlsruhe. Happy to be representing Australia, and doubly happy to realise I’m not the only antipodean there – Kirsten Sharpin is the resident Kiwi.

and yours truly – Australia

To find out more about the final, have a look here.

I spent a few days in northern Bavaria auditioning for the renowned Wagner Stimmen competition in the city of Bayreuth. It was hot, the town was abuzz with Bayreuth Festspiele activity, and the people were friendly. The competition ran over two days, with 36 singers from 18 different countries having been preselected for round one. I’m pretty sure I was the only Aussie in the room, though I did spot a Kiwi! Every time I attend some sort of event for Wagner singers I feel like I’ve found my clan. We’re all tall, broad, “Glamazon”, and generally pretty down to earth.

When not trying to keep cool under competition pressure and 35 degree heat, Familie Parker went strolling through Bayreuth, which is a beautiful, elegant, and very clean city. The general folk could not be more different from the folk in Berlin.

The 1 year old thought that the fountains and little water play areas running through the old town were hilarious. We followed the Walk of Wagner (the male singers certainly outperform the women when it comes to repeat performances in Bayreuth!), then we camped out on the lawn in front of the Festspielhaus and watched the glamorous people clothed in finery ascend the hill to see Siegfried.

No opera on the cards for Familie Parker, time did not permit it, unfortunately, but I am positive there will be a next time in Bayreuth. Hopefully accompanied by a CD signing 🙂 For now, to concentrate on the competition semi finals in Karlsruhe!